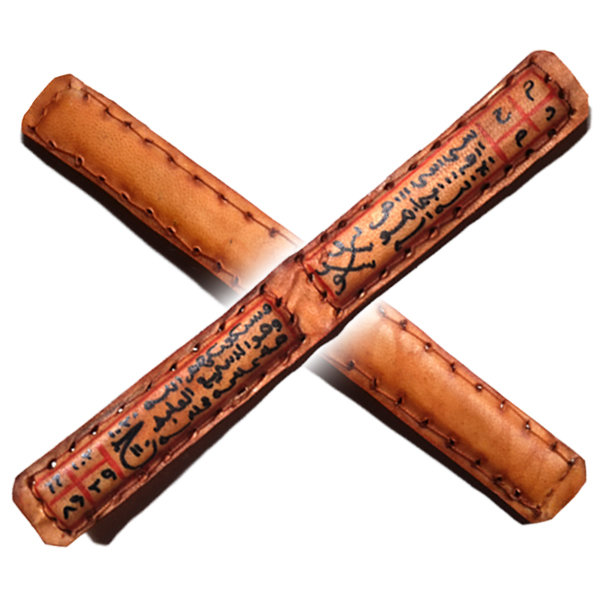 This two-fold taweez is a very special talisman in the sense that it contains two separate elements within a single case. The dual enclosure is separated by a metaphysical barrier; i.e. handwritten formulas of Solomonic ritual magic. Though written in Arabic, these spells are performed according Javanese ceremonial magic. In Java, the mystical art of Solomonic divination involves the consecration of the skin of a Javan deer from which the taweez is to be made. Thus, the two-fold taweez is empowered through Solomonic divination techniques, including spirit conjuration.

In addition, various occult elements are concealed within the sacred Javanese deer skin casing. These hidden elements are intended to summon and control spirits and their supernatural abilities, thereby doubling the amulet's esoteric power. Due to the profoundly powerful elements embedded within the deerskin casing, this mystical object has been effectively turned into a practical vessel for divination and conjuration. This Javanese taweez can, therefore, be used for a broad range of purposes, varying from mundane affairs to spiritual matters.

And as such, the two-fold taweez is believed to have great potential to bring the wearer numerous blessings that will improve his or her life in every aspect. Indeed, countless blessings will be bestowed by the summoned spirits. Such blessings can manifest in various forms depending on the kind of help or assistance one is seeking from the spirits. Whether it be wealth, protection or love, this authentic Indonesian amulet has the miraculous ability to fulfill all wishes, lest the things one asks for are reasonable and realistic, but above all, this implies moral responsibility, in the sense that one's wishes should not be motivated by unwholesome desires (e.g. anger, greed, jealousy, envy).