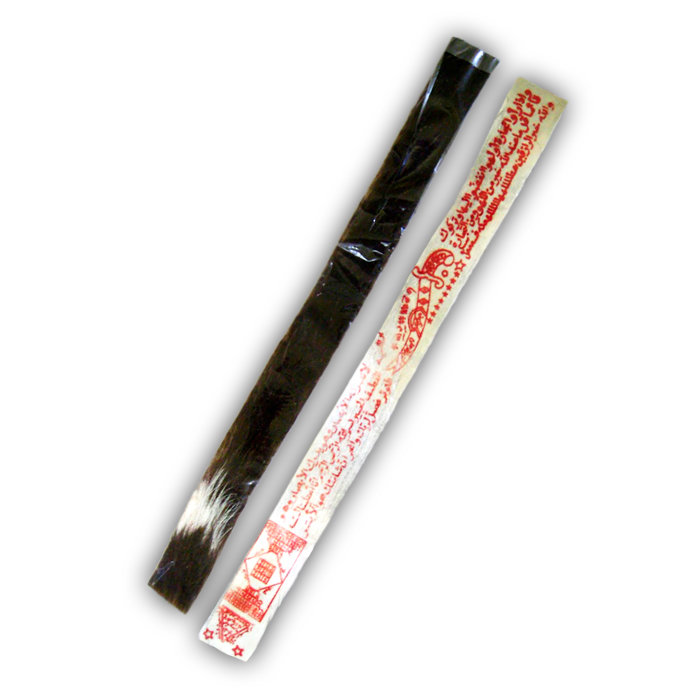 The talismanic waist belt is a powerful Islamic talisman which primarily serves as a source of protection against black magic. In addition, the waist belt features Islamic spells to evade various sorts of danger. The Arabic letterings contained within these spells are designed to ward off attacks from wild animals, ill-willed people, and malicious ghosts and spirits.

As the name already suggests, the talismanic belt should be worn around the waist. One way of doing this is by placing it inside one's waist belt if it has a zipper on the inside. By keeping the talisman inside one's waist belt, one thus will be able to enjoy continuous blessings of protection wherever one goes. In case one does not have a belt with a zipper, it is also possible to attach the talisman to the inner side of one's favorite waist belt. There are, however, also other options for wearing or keeping this talisman, e.g. placing it inside a bag to carry the talisman with you when you leave the house, or you can store the talisman at home to keep harmful ghosts and spirits away.

The belt is made from high quality goat skin rawhide. The goat has been ritually slaughtered according proper Islamic tradition. Since ancient times animal skin forms an integral part of the traditional clothing of seers (rêsi), shamans (dukun), magicians (bomoh), sorcerers (pawang), mystics and wandering ascetics. Hence, in many Southeast Asian cultures animal's skin is considered a treasurable possession of great spiritual value. Also, it can be used as a medium in order to transmit mystical powers onto the animal skin. In this case, the rawhide belt features various magic formulas which are transcribed into written form, using the Arabic script.

When wearing the talismanic waist belt, one will stay safe from harm. Evil jinns (spirits) cannot approach or even come near the person who wears a powerful talisman like this. Likewise, harmful ghosts and demons are unable to disturb the owner of the talismanic belt, nor can they interfere with that person. In this way, then, all negative energies are reversed, cleared, and sent back to where they came from. Thus, the talismanic rawhide waist belt helps the owner to maintain in an auspicious environment at all times.