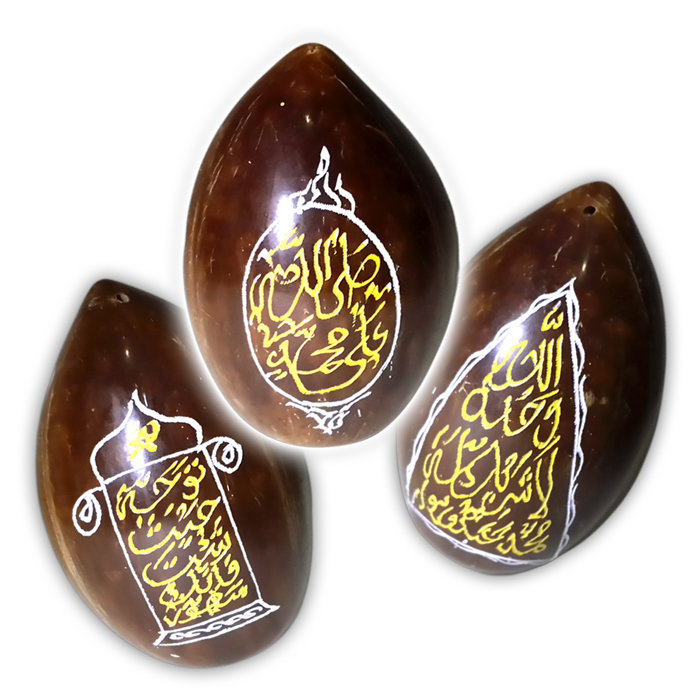 Gopher is the type of wood that supposedly has been used to build Sāfina Nūḥ with, i.e. Prophet Nūḥ's (Noah) Ark. In addition, the staff of Prophet Mūsa (Moses) is also said to be made of the same type of wood. Both the ark and the rod are by no means ordinary man-made objects. Indeed, according to Jewish, Christian and Islamic tradition these are believed to be created by God. Hence, gopherwood is considered an extremely sacred substance, which is commonly praised for its immense spiritual value and healing benefits by people in the Middle East and in the Islamic world in general.

This particular wooden amulet was made and blessed by an Indonesian Islamic dukun. Every now and then the dukun is invited to join a host of Islamic Sufi masters to spread the traditional mystical teachings with a larger audience in a foreign country. Thus, the sacred wooden substance was obtained during one of his spiritual journeys to Turkey. After a successful visit to Turkey the dukun soon returned to Indonesia. There the amulet underwent a lengthy series of individual blessings, during which the holy wood received several Arabic spells of true Islamic magic by the hands of the dukun himself.

There are three different kinds of magical spells engraved on the exterior surface of the amulet. Each of these spells serves a different purpose, namely (1) protection and evasion; (2) spiritual guidance and enhanced concentration in prayer; and (3) improved fate and luck. Thus, multiple powers are combined into a single mystical object, making it powerful and highly effective amulet indeed. Moreover, with only a handful of these ever made, an exclusive talisman of this kind is destined to become a rarity in the near future.

The sacred wooden amulet can be placed on one's home altar or in the place or room where one normally performs prayers and meditation. Whilst praying, or during recitation of holy scriptures, the amulet can be held in one's right hand to increase the power and effect of the sacred words which are being chanted. This will automatically bring about a state of total mental absorption, which, in turn, shall lead to enhanced meditative practice. For the rest it is also possible to place the amulet in one's shop, for the gopher wood is also known for its mystical properties which can help to boost sales and increase commercial success.