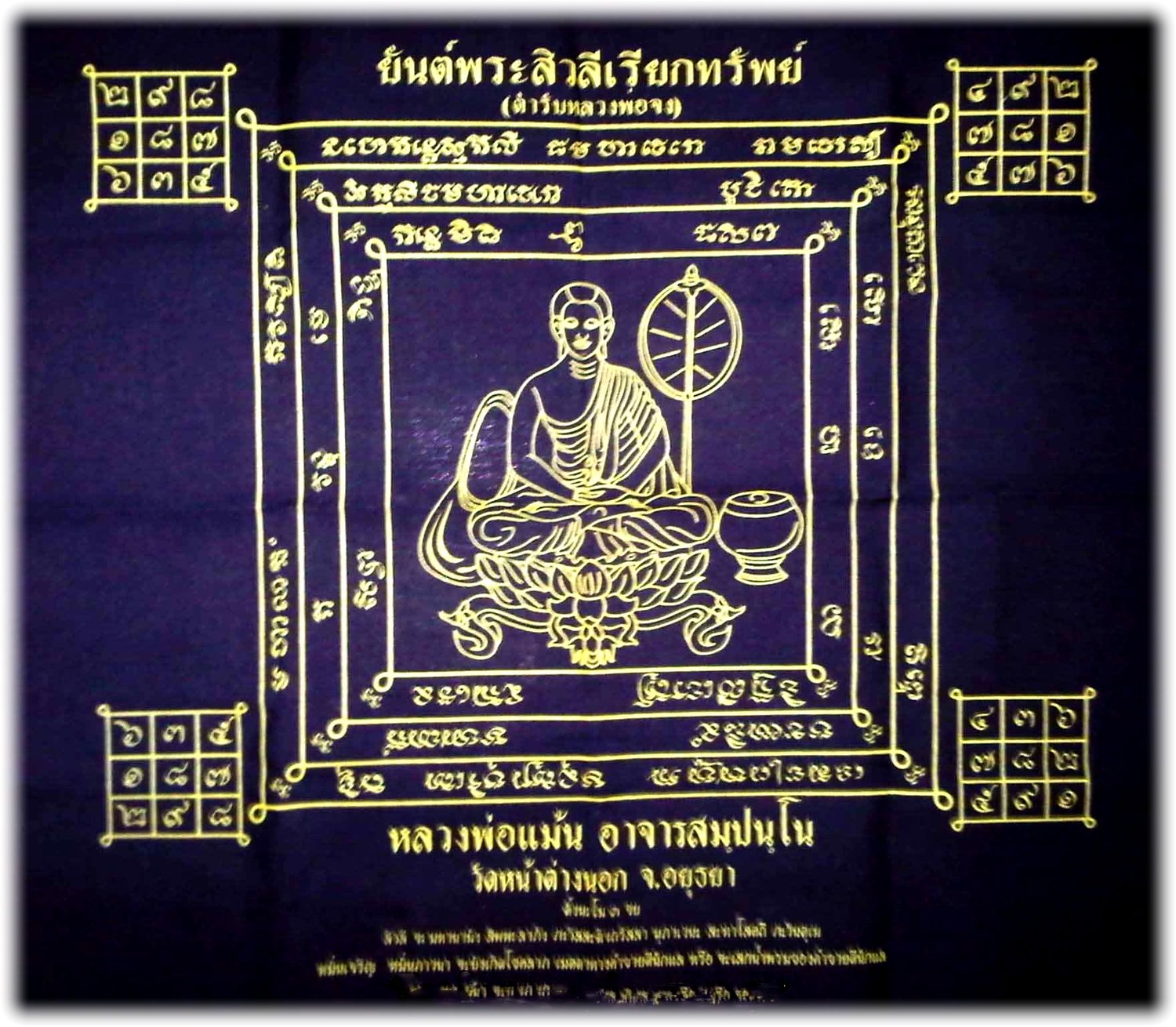 This yantra cloth is made and consecrated by the Buddhist monk Luang Por Maen. Luang Por Maen was born on the 13th of March in B.E. 2481 (1938 C.E.) at Pathum Thani province in Thailand. When he was 27 years old, he ordained as a Buddhist Monk at Wat Yai Chai Mongkol. Luang Por Maen learned his skills in magic from Luang Por Jong.

In one of his past lives, the Buddhist saint Sivali (Pāḷi: Sīvalī Thera) was blessed with the opportunity to see the Buddha Padumuttara (the 13th Buddha). At that time Buddha Padumuttara gave to a monk the honor of being foremost among his fellow monks obtaining the Four Requisites (1: food; 2: shelter; 3: robes; 4: medicine). Upon seeing the people offering an abundance of those Four Requisites to this particular monk, Sīvalī was deeply impressed and made a vow to attain a status in monkshood similar to that of the monk he had witnessed.

Buddha Padumuttara noticed Sīvalī’s earnest dedication and he told him that, in a future life time – at the time of Gotama Buddha – his strong determination to become foremost among the monks obtaining the Four Requisites would become reality.

Then, in the time of Gotama Buddha, Sīvalī was born as a prince. Legend has it that because of an unwholesome deed he had performed (as an unrighteous King creating a lot of suffering to his subjects) in one of his past lives, his mother had to carry Sīvalī in her womb for a period as long as seven years. When the seventh year had come his mother could not yet give birth for another six days. Then, on the seventh day she worried she might die soon, so she requested her husband – the King – to invite the Buddha and his disciples for a meal at the palace so that she could offer them food for their alms. The King consented to her request, and took care of the preparation of the meal for the monks.

After the Buddha and his disciples had finished their meal they bestowed blessings upon the queen (Sīvalī’s mother), which caused her pains to cease. Then when the Buddha and his disciples had left the palace she give birth without any further problems. Thus a wealthy prince by the name of Sīvalī was born in this world. Remarkably, the pains and hardships of both royal family members and those of the people living in their Kingdom had ceased and made way for an abundance of food and wealth.

Later, the Venerable Sariputta would invite Sīvalī to join the monastic community to which the queen granted Sīvalī her permission to do so. Whilst his hair got shaven he contemplated on the 32 parts of the body and its impurities. Immediately after that Sīvalī attained liberation (Pāḷi: mokkha; Sanskrit: mokṣa - a synonym for nibbāna / nirvāṇa).

From that moment onwards, the monks started to notice that wherever Sīvalī went to travel, he and his fellow monks were never short of the Four Requisites. In fact, they were always given an abundance of offerings by the laity. The Buddha soon recognized that Sīvalī’s vow from the past had now come to fruition, thereby declaring him foremost among the monks obtaining the Four Requisites.

Apart from the fact that Sīvalī was an arahant (a fully enlightened) disciple of the Buddha, and had played an essential role in taking care of the Four Requisites for the monks in the monastic community, people worship Sīvalī as a saint with miraculous power to quickly attract an abundance of prosperity and wealth.