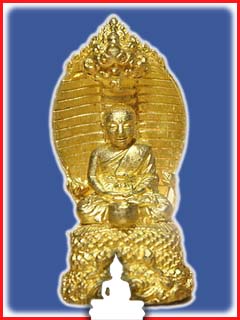 Historically Phra Upakut (Sanskrit: Upagupta Thera) was a Sarvāstivādin Buddhist forest monk who lived in the region of Mathurā in Northern India during the time of King Aśokas reign (third century B.C.E.).

Remarkably, Upagupta Thera is not mentioned in the Pāḷi Canon anywhere at all, nor is there any reference made to him in the Pāḷi commentarial literature. That is due to the fact that the legend of Upagupta Thera first developed in Sanskrit Buddhist traditions, such as the Sarvāstivādin school, and only later (by the twelfth century B.C.E.) became established in northern Southeast Asian countries (Burma, Thailand, Laos).

The Divyāvadāna text describes a passage in which the Buddha travelled with his disciple Ānanda to the land of Mathurā. On their journey the Buddha made a prediction that one hundred years after his parinirvāṇa, on Mount Urumuṇḍa there would be born a thera by the name of Upagupta. When Ānanda asks the Buddha about Upaguptas former life the Buddha tells him that Upagupta had been a monkey who lived on Mount Urumuṇḍa in his past life.

Thus it happened that Upagupta was born at the time predicted by the Buddha. Upagupta Thera would later become the fifth patriarch to whom the Dharma had been transmitted after the Buddha's parinirvāṇa. Mahākāśyapa was the first patriarch who had been entrusted with the preservation and transmission of the Dharma; Mahākāśyapa, in turn, transmitted it to Ānanda; and Ānanda, then, passed it on to Madhyāntika and Śāṇakavāsin, who would become Upagupta's preceptor (Sanskrit: upacaya).

In contemporary Thailand, it is believed that Phra Upakut is still alive, living at the bottom in the midst of the Southern Ocean where he resides in a palace made from brass.

People regard Phra Upakut primarily as a protector and guardian who possesses great magical powers, and as a saint who pleads in behalf of his worshippers when they are in trouble.

This particular aspect of Phra Upakut's saintly character is somewhat similar to the characteristics of bodhisattvas that postpone the realization of their Awakening in order to help people reduce their suffering in this world.