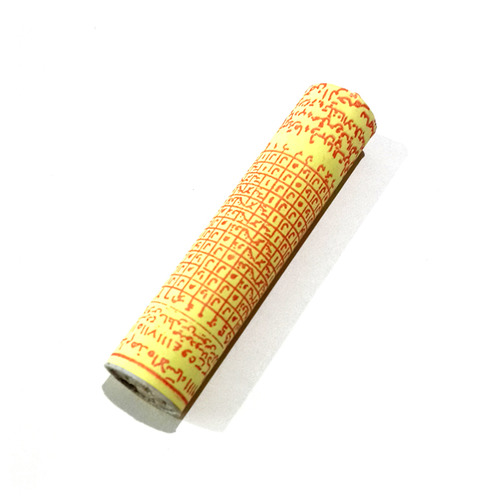 Magical scrolls have a prominent position in Southeast Asian mystical tradition. This kind of traditional talisman is a genuine collector's favorite. Due to the authentic consecration method, handmade amulets of this kind carry significant mystical and spiritual value. The exterior surface of the magical scroll is enriched with powerful Islamic spells for wealth increase. Also, there are various sacred elements inserted; thus, the magical scroll contains a mixture of sacred powders, herbs, pollens and flowers.

The traditional Indonesian magic scroll is many ways similar to a takrut, which is the Thai variant of this type of amulet. Indeed, both the production method as well as the blessing of the talisman are performed according ancient mystical tradition. Thus, the magical scroll has been made in the traditional style of olden times, and thereby empowered with sufficient mystical properties.

As such, the magical scroll is a perfect example of Malay magic in its purest form, because the dukun by whom this amulet was made inherited the occult knowledge directly from his ancestors. Hence, the dukun has gained direct access to the source of magical powers as practiced by his forefathers. Through channeling the mystical energies directly from the source, the dukun bestowed auspicious blessings onto the talisman. It is therefore believed, that this magical scroll is endowed with extremely powerful qualities, which serve to boost one's wealth through increasing riches.