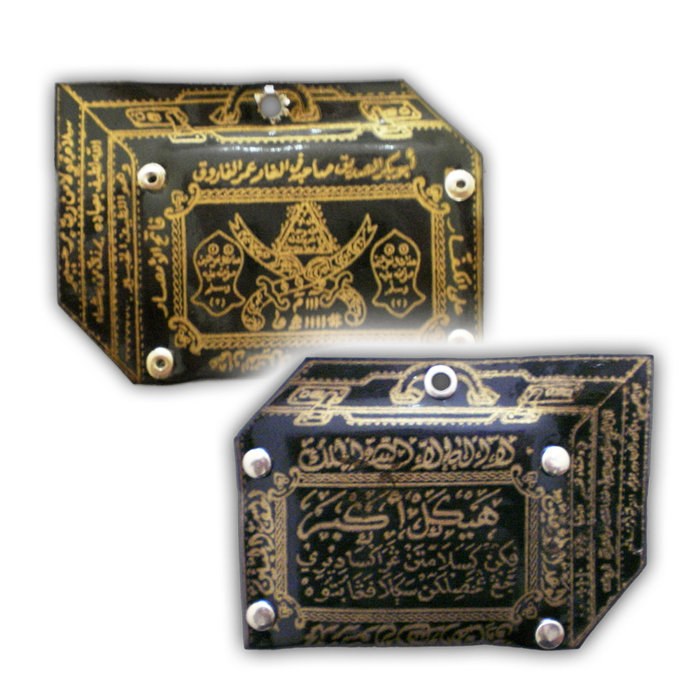 The magic money keeper is, as the name already suggests, an authentic Indonesian talisman to prevent unpleasant financial surprises. The magical locket thus is consecrated with highly effective mystical spells to protect one's financial income as well as safeguarding one's valuables and personal property. Hence, the shape of the locket resembles a safe. In addition, both sides of the talisman are covered in sacred Islamic spells and Arabic lettering.

Also, there are several mystical objects inserted to the locket, which were then sealed with tiny metal pins, while at the same time mantras were being uttered repeatedly. Obviously, the magic money keeper features the characteristic style of the mystical items made by the renown Islamic mystics from Banten Province in West Java, Indonesia. Therefore, it goes without saying that this magical locket is properly constructed according authentic Indonesian mystical tradition.

The magic money keeper should be kept along with one's treasured possessions; i.e. in one's wallet, in a safe, or any other particular place where valuables are stored (a car, house, property, etc.). In this way, then, the magical locket will ensure a controlled cash-flow, and may even cause one's monthly wages to increase. Alternatively, its mystical properties can also lead to an unexpected bonus, or even bring promotion.

It is also believed, that a person's outstanding payments and debts will be cleared within a very short time after s/he has obtained this sacred talisman. For this reason, the magic money keeper can be considered a gambler's favorite. Hence, the magic money keeper will quickly do away with any further unpleasant monetary surprises, thereby clearing the way to a brighter future.