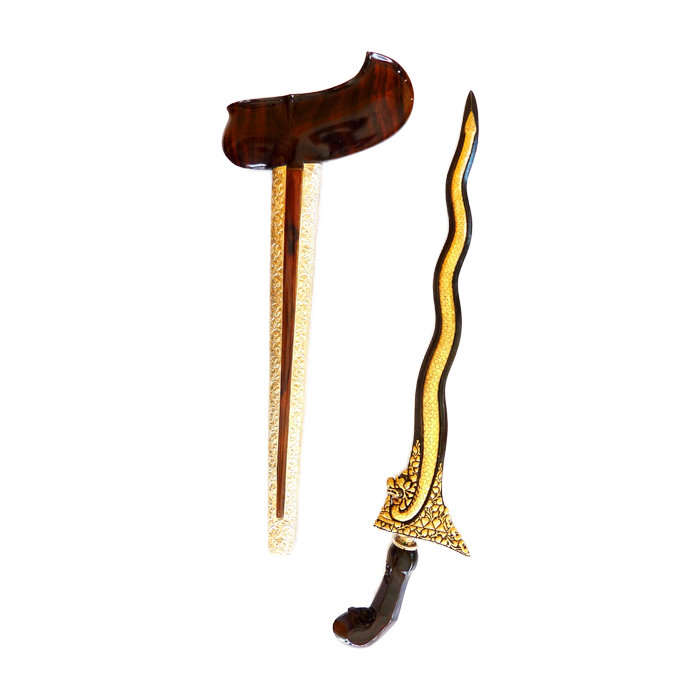 The various kind of nāga dapur keris models (Sapta, Sarira, Sasra, Siluman, etc.) are perhaps the most sought-after heirloom items among the serious pusaka collectors around the world. In fact, the demand for luxurious keris kamardikan featuring a Nāga Sapta dapur has rapidly increased in the past three decades. Several different types of Nāga keris models are commonly adorned with a very fine gold-plated finish ('kinatah'). Due to the use of such costly materials, the Nāga Sapta dapur is often reserved only for the wealthy. However, by collecting exclusive keris kamardikan one also directly supports the contemporary empus, who can thus continue practicing the ancient tradition of the keris in today's society.

As the name already suggest, the Nāga Sapta dapur represents the mythical nāga creature, whereas 'sapta' refers to seven (sapta means 7 in Sanskrit and Javanese) Nāga kerises made in the nineteenth century during the reign of Sultan Pakubuwono VII (1830–1858 CE). The nāga's head, along with its royal crown, and its body as well as its tail, feature a stunningly beautiful gold-plated kinatah finish. In fact, the entire base of the blade is covered in kinatah; the sraweyan and wadidang parts of the blade, as well as the ganja, are richly adorned with traditional Javanese flower patterns.

Indeed, the high level of detail of this keris kamardikan is absolutely amazing to say the least. It is not just the thick layer of kinatah alone that makes this keris a masterpiece, for indeed, it requires a lot more skills from the empu in order to carve the subtle and refined details on the kinatah in such a diligent way. As far as aesthetic beauty is concerned, the artistic splendor of the keris kamardikan Nāga Sapta goes beyond that of the average empu.

Also, when gently placing the keris on the hilt with its blade facing upwards, it is possible to make it stand upright in perfect balance (as can be seen in the picture below). This proves just how extremely well the empu has forged the blade with the perfect dimensions. Hence, the keris kamardikan Nāga Sapta can be considered a acquisition well worth, because as it also serves as a safe investment; i.e. an authentic heirloom for future generations.