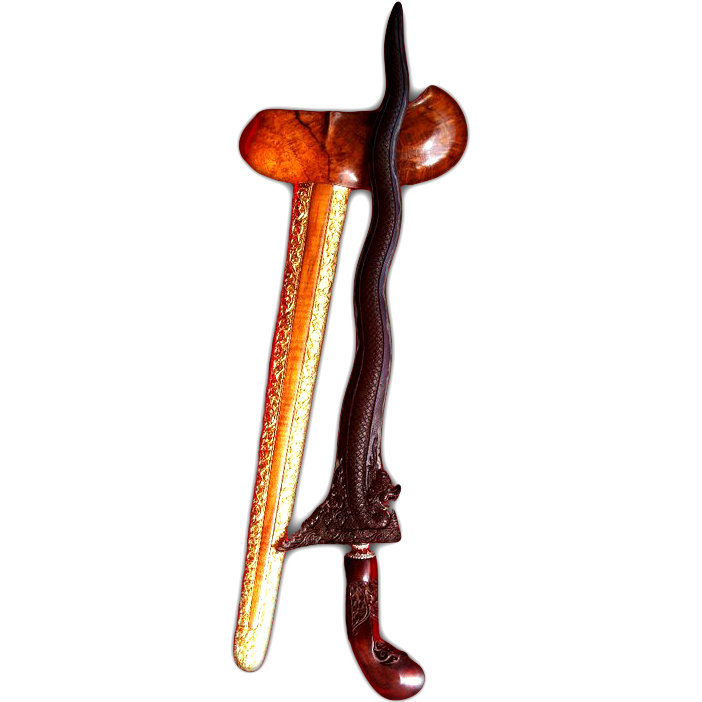 This keris Naga Sapta is a contemporary keris (kamardikan) made by empu Sadek from Blutoh in Sumenep, Madura. Its dapur, the Naga Sapta, represents the mythical naga creature. In Javanese, however, this kind of dapur is called 'Nogo Sapto', which is derived from Sanskrit ('nāga': serpent; 'sapta': seven). The word 'sapta' (or 'sapto') refers to seven kerises made by royal empus in the keraton of Surakarta in the nineteenth century. These seven blades kerises were ordered by Sultan Pakubuwono VII (1830–1858), the ruler of Surakarta Hadiningrat; each of these seven kerises featured the dapur Naga, which has a blade with seven waves ('luk').

It is said, that four of these are now in in Europe, namely in the Netherlands, Germany, England, and Italy. Of the remaining three kerises, two are still in Indonesia today; one is preserved in the Keraton Kesunanan Surakarta (Royal palace of the sultan in Solo, Central Java), and the other one is owned by a high official. Unfortunately, at least for now, the seventh keris of the Naga Sapta series remains lost in time.

Empu Sadek has forged this masterpiece with pamor Wengkon damascening. This pamor pattern is sometimes also called 'Tepen' or pamor Lis-lisan, which is a 'rekan' type of pamor, meaning that it was created intentionally by the empu. Though this particular pamor motif may seem rather ordinary, yet it is considered an extremely difficult pattern to forge; only an experienced and highly skilled empu will be capable of making a keris that has the pamor Wengkon on it. It is, however, not a 'chosen' type of pamor, and thus can be owned by any person.

Hence, the keris Naga Sapta, in combination with its pamor Wengkon, is endowed with mystical powers that will help its owner to become successful in life. Also, it provides the courage to withstand any obstacle a person may have to face, and the strength to overcome the hardships he or she may encounter in the course of life. Apart from that, because this keris has a dapur Naga, it also serves as a powerful medium that can be used for the purpose of commemorating Sultan Paku Buwono VII.