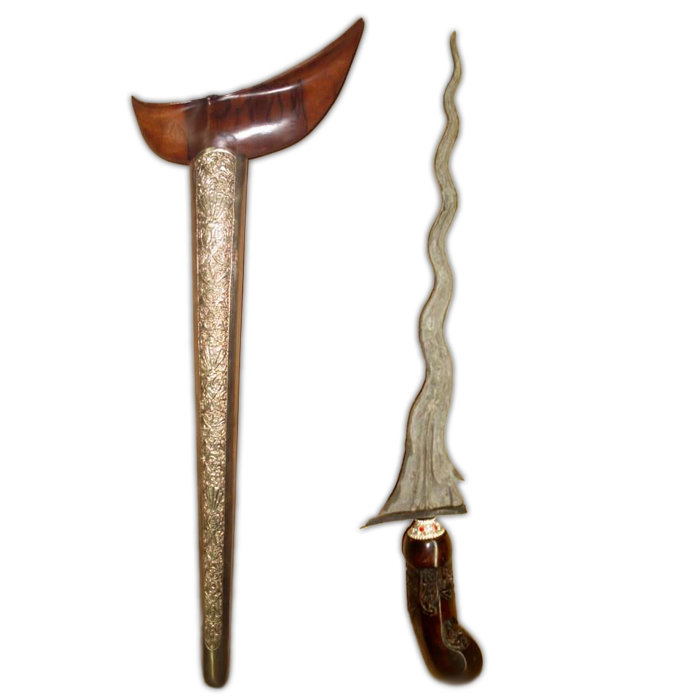 This ancient pusaka heirloom keris is made in the sixteenth century, at the time of the Pajang era (1568–1586 CE). The dapur (model) of this keris is known as 'Carita Keprabon' (sometimes also spelled 'Carito Kaprabon'). Carita means story, and keprabon is term commonly used to refer to the royal palace of kings or sultans, i.e. the keraton. Carita is also a collective term for a series of dapurs, which includes various models such as the Carita Bungkem, Carita Buntala, Carita Daleman, Carita Gandu, Carita Genengan (or Gunungan), Carita Kanawa, Carita Kasapta, Carita Malela, and Carita Prasaja. In addition, there is the Carita dapur of a tombak (spear) as well, which just like the keris, features a blade with eleven luks.

The antique blade of this keris Carita Keprabon has an extraordinarily soft tone to it, which demonstrates the high-quality of metal used for the forging of the pamor pattern. This exquisite pamor motif is named 'Pedaringan Kebak' and covers almost the entire surface of the blade. Pedaringan Kebak translates as rice shed, i.e. a traditional storage place for uncooked rice. Both the meaning and the design of pamor Pedaringan Kebak share many similarities with the well-known Wos Wutah motif, though the former is considered superior to the latter, due to the fact that its design is more sophisticated and thus requires more skills of the empu.

The keris comes with a traditional hand-carved Timåhå wooden sheath, also known as warangka Branggah Yogyakarta. Indeed, Timåhå wood is highly sought after for its mystical properties. This is because the Javanese commonly believe that there dwells a mystic khodam spirit in the Timåhå tree. The khodam is supposedly said to be able to bestow blessings of protection upon the owner of the keris.