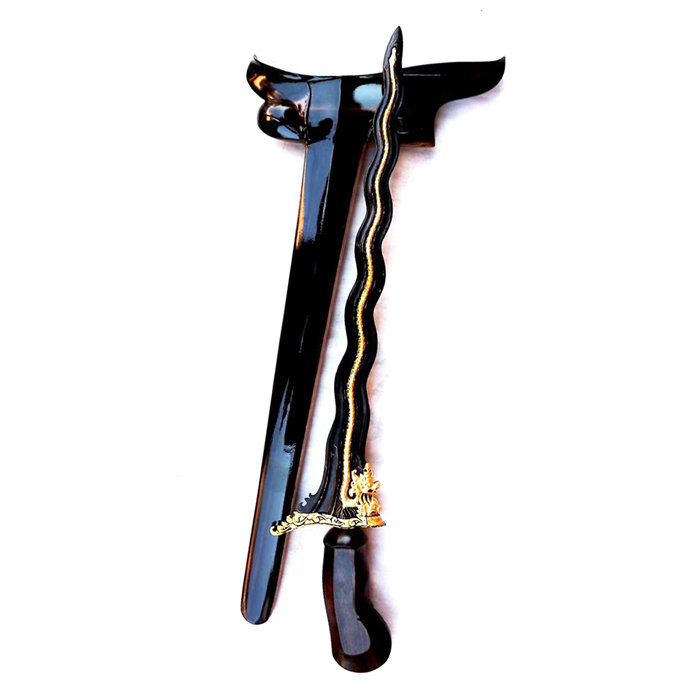 This high-end keris kamardikan, or contemporary keris, is a true masterpiece made by empu Fatur Rohman, a highly skilled artisan of royal descent. Empu Fatur Rohman is arguably one of the best keris makers in Indonesia today. Thus, the keris Nāga Makara demonstrates the empu's mastery of sophisticated forging techniques. Furthermore, the clever combination of two mythical creatures – the nāga and the makara – merged together in a single dapur attest to the artistic splendor of the empu.

The dark black color of the rather large and thick blade of this keris indicate the high-quality iron used in the forging process. As with most Nāga dapurs, the blade of the Nāga Makara features thirteen luks ('waves'). In addition, a beautiful pamor motif covers the exterior surface of the blade, which resembles the pattern of a watermelon skin. Hence, this pamor motif is called 'Kulit Semangka'. This particular pamor pattern is believed to enhance one's social life; i.e. the owner of this keris will enjoy flourishing social relationships.

Another luxurious feature of this exquisite Balinese keris kamardikan is its gold-plated finish ('kinatah'). The entire gandik of the blade is covered in gold-plated kinatah. So too is the ganja, which contains gold-plated flower patterns. Then, of course, in the center of the blade there is the gold-plated body and tail of the nāga creature, which reaches all the way up to the tip of the blade.

However, the boldness of the keris Nāga Makara extends beyond the magnificent appearance of the blade alone. Indeed, its robust scabbard and hilt are making this keris a complete masterpiece as a whole. Both the sheath and the hilt are hand-carved from heavy and dense ebony wood. Ebony wood is considered a valuable material for various kinds of traditional handicrafts, though it is commonly used for Balinese pusaka ornaments in particular. The finely-textured wood has been carefully polished by an adept mranggi (traditional sheath and hilt maker), resulting in a remarkably smooth finish of the warangka (scabbard) and the danganan (Balinese hilt).