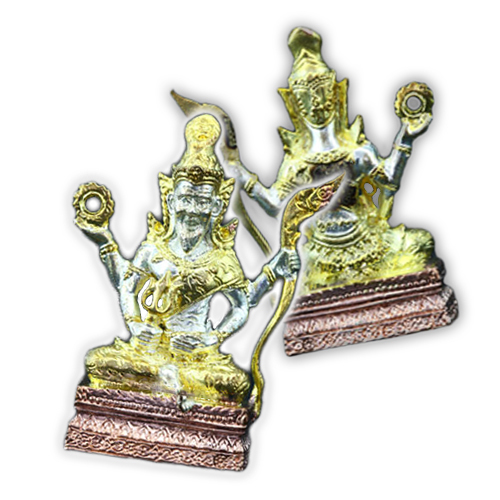 The four-armed Rêsi Wisnu is an avatar of the Hindu god Viṣṇu avatar. This avatar, however, is not a human incarnation, but rather a physical manifestation of a deity residing in the higher celestial realms of existence. The heaven whence the deity descended granted him rebirth as the guru master of all rêsi saints on earth. The maker of this sacred image – Luang Phu Daeng; a senior Buddhist monk and abbot at Wat Huay Chalong temple in Thailand – received a mental vision of Rêsi Wisnu when the venerable master was hospitalized back in 2008. In this vision Rêsi Wisnu reached out to the physically ill monk to give him a conch shell, which is one of the sacred attributes of Viṣṇu. When Luang Phu Daeng woke up in the morning after he had experienced this miraculous event, it turned out that he was fully recovered from his illness and paralysis.

Thus, Luang Phu Daeng decided to make a mystical object of worship in the image of the holy rêsi master who healed him for the sake of his followers. The effigy is made from sacred brass with a three colored metal plating as finish. In addition, there are sacred minerals and earths from seven different auspicious places inserted to the base of the amulet. Hence, it is said that the person who performs sincere worship to Rêsi Wisnu will thereby receive blessings of preferential treatment and can always count on the people around you for help, regardless of whether they are friends or strangers. Similarly, when there are no humans around to help you in a situation of danger, then deities, angelic beings and benevolent spirits will come to lend you their aid and protection.